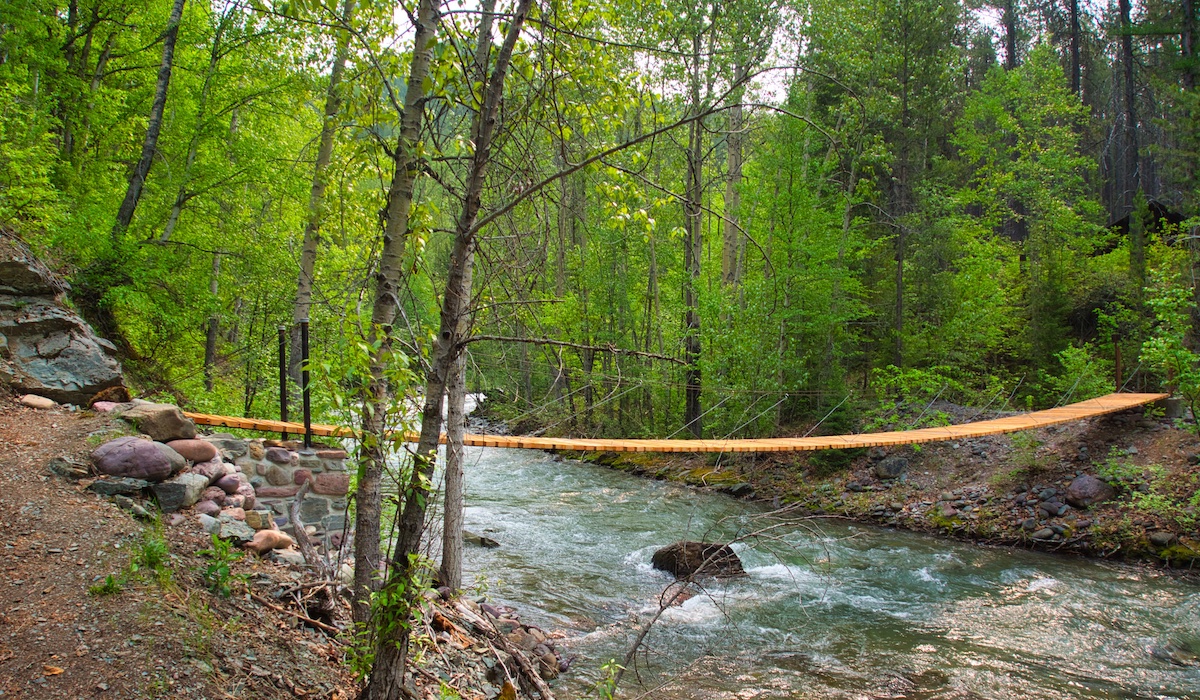 This route was the main year-round patrol thoroughfare for park rangers before construction workers completed U.S. Highway 2 in 1930. The trail follows the Middle Fork of the Flathead River through John F. Stevens Canyon under a diverse forest that reclaimed the land after the 1929 Half Moon Fire.

The out and back hike from Belton Bridge to the Harrison Lake trail junction is 15.2 miles (24.5 kilometers). The footpath rises and falls over ridges and benches as it makes its way along the base of the Belton Hills.

From U.S. Highway 2, drive into West Glacier. Just past the Mercantile, turn right onto Old River Road. If you are coming from inside the park, it is the first left after crossing the bridge. Follow the road until you arrive at the Belton Bridge and park on the side. Please do not block any gates or entrances.

Visitors used this site as the main entrance to the park from 1897 to 1936. A log structure first spanned the Middle Fork at this location in 1897. Until that time, rowboats ferried visitors across the sometimes raging river. The log bridge was replaced in 1920 by a concrete arch bridge.⁴ A metal structure was built downstream at the site of the current bridge in 1936. That became the new entrance.

Mother Nature had a little different plan. Late snow in April and May 1964 made a below average winter snowpack into an above average accumulation. Then it rained. During 24 hours, park personnel measured 10 inches of precipitation at Lake McDonald Lodge. The upshot was widespread devastation brought on by severe flooding.

The enormous force of the water mangled the Great Northern Railway main line, eroded away U.S. Highway 2 in places, destroyed the metal bridge at West Glacier, and washed away miles of trails. The deluge came over the top of the concrete arch bridge scoured away the decking leaving only the arch behind.²

The arch that survived that historic flood supports the decking you walk across to access the trail on the opposite side of the river.

After walking across the bridge, keep to the right. If you go left, the path which was the original roadway into the park will lead to the Park Headquarters area.

During late spring and early summer, various colored rafts and kayaks carry wide-eyed passengers through river structures with names like Bonecrusher, Jaws, Pinball, Tunnel Rapid, and Can Opener Rock. Glimpses of this activity from the trail can be entertaining. Later in the summer, the water is tamer.

The first five miles of the trail leads through a mixed Douglas fir forest. Then it enters an open lodgepole pine stand, which was my favorite during the hike. The quiet was only disturbed by the restorative sounds of the breeze moving through the pines and an occasional bird. Yellow / orange light caused by the smoke haze from fires in Alberta gave the forest an indescribable look.

At 5.6 miles (9 kilometers), the path intersects Lincoln Creek. A bouncy single person suspension bridge lets you cross without getting your feet wet. The Lincoln Creek Snowshoe Cabin is a short distance away.

The Park Service built the first Lincoln Creek cabin in the 1920s. However, the 100,000-acre (40,469 hectares) 1929 Half Moon Fire consumed it. The current cabin was constructed in 1931. Rangers patrolling the extensive southern boundary of the park used it as an overnight shelter. Today, trail crews may be the only personnel using the structure.³

Once you leave the cabin, you will see an increase in spruce and western redcedar. Sections of trail in the next two miles can become overgrown with brush. At 6.4 miles (10.3 kilometers) from the trailhead, there is a spur trail leading down to the river. During low water in August and later, it is possible to ford the Middle Fork safely. This is where you would intersect the Southern Boundary Trail after crossing the river. Always check with the knowledgeable folks at the Glacier National Park Backcountry Office for the latest information and directions.

At 7.6 miles (12.2 kilometers) from the trailhead, you will find the Harrison Lake trail junction. The sweet surprise waiting is the Dan and Josephine Doody homestead, established before Glacier became a national park in 1910. The remains you see was a two-story hunting lodge.

John Fraley, in his book Wild River Pioneers, provides an entertaining description of Dan and Josephine. The following are some highlights from his book.

Josephine Doody worked as a dancehall girl and allegedly shot a man in Colorado around 1890. She then headed north and ended up in the seedy and notoriously dangerous railroad town of McCarthyville. Apparently, she took a liking to opium while in that town. The whistle-stop no longer exists. But the former site is located about six miles west of Marias Pass.

Dan Doody, a fur trapper, and prospector met her in one of the 32 saloons there and fell in love. He subsequently hauled her off on a mule to his 120-acre homestead near Harrison Creek. There they started a lucrative moonshine business. Frank built Josephine a small cabin hidden in the woods to which she could escape when the law came.

Great Northern Railway trains would stop and place their orders for moonshine by blowing their whistles using short blasts to indicate the number of quarts they desired. Josephine would row across the river and deliver her product.

Dan was one of the six original rangers hired by Glacier National Park shortly after its establishment in 1910. Yet, he didn’t last long at that job. Excessive poaching was the reason for his short tenure. Dan died in 1919. Josephine stayed on the property and guided fisherman into her 70s. She left the park in 1931 and died of pneumonia in 1936 at 82.¹

Our trip ended at the Doody homestead. But continuing another 4.6 miles, the South Boundary Trail will intersect the Nyack Creek Trail, which leads into the Nyack Coal Creek Camping Zone. This remote area can also be accessed from Walton, Two Medicine, or by fording the river during low water.

I invite you to take a look at my book Glacier National Park, Going-to-the-Sun Road: a traveler’s guide. I’m confident it will help with your planning and exploration of this engineering masterpiece and the surrounding wilderness. See it here on Apple Books.