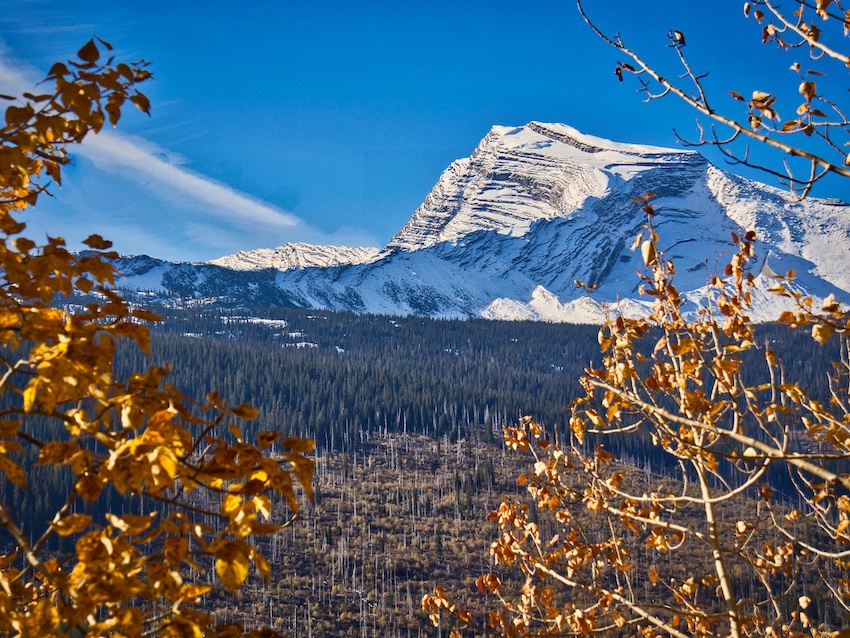 The weather and fall colors have been extraordinary this year, and I couldn’t resist the urge to go for a bike ride. The Going-to-the-Sun Road is closed for the season as it always is after the middle of October. But, it was open as far as Avalanche Creek on the west side. Perfect.

I rose early and arrived at Avalanche Creek with color in the sky. However, I missed the good stuff. No big deal. I was the only one in the parking lot!

My truck thermometer indicated 24℉. The cables on my bike were a little stiff, and the seat was cold and hard. No big deal. I had this part of the Going-to-the-Sun Road in Glacier National Park all to myself! Nobody is tailgating me. If I want to stop and check something out, I’m not interfering with anyone else’s experience. My face was starting to ache from the smile.

The early morning light was illuminating the snow-covered peaks as I rode through the dark old growth western cedar and hemlock forest. Every once in a while the needles of a solitary larch stood out like a golden lantern. Most of the black cottonwoods still retained their fall colors.

About 1.5 miles north of Avalanche Creek is a place called Red Rock Point. The observation deck at the end of a short trail overlooks the beautiful McDonald Creek. The path is bordered with large red boulders that offer numerous examples of riffle marks made in the shallows of the ancient Belt Sea. These are over one billion years old.

The section of the Going-to-the-Sun Road that was leading me to Logan Creek was completed during the period 1924 to 1925. Construction workers first cut their way through the thick, tangled forest to establish the 4.5-mile route from Avalanche Creek to Logan Creek. Enormous stumps were wrenched from the forest floor so that the road grading could proceed. The distance doesn’t seem like much in a car, but a bike provides the gift of a different perspective.

I have driven over Logan Creek countless times and never stopped. There was too much that had gone on there in the past for me to ignore it any longer. When I arrived, there was no water to be seen in the stream bed. It will be a different story in the spring.

According to the park service signs, the bridge that joins the banks on either side was built during 1926 and 1927. I was curious why it took two years. It turns out that the bridge was completed in 1926 with only one arch. The stream flooded in the fall of that year. Consequently, the park service and the Bureau of Public Roads decided to add another arch to the west end of the bridge in the summer of 1927.2 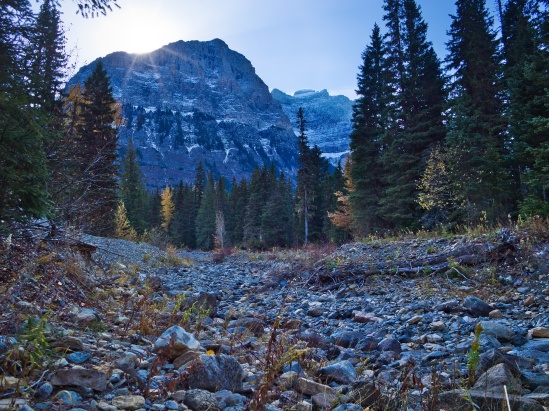 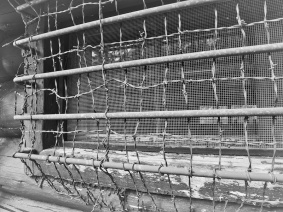 The Logan Creek Patrol Cabin is upstream a short distance from the bridge. It was constructed in 1925 as part of a system of cabins a day’s walk apart. This allowed park service rangers to patrol greater areas without having to return to their headquarters as often. I’ll bet that this old place has a few stories it could tell.

The application for the National Register of Historic Places mentions an item inside the cabin that was labeled with the letters CCC.3 That would be the Civilian Conservation Corps instituted by President Franklin D. Roosevelt.  The program hired unemployed, unmarried men ages 17 to 28 from 1933 to 1942. Their contribution to building the park infrastructure in addition to fighting fires was invaluable.

The windows of this log structure were heavily fortified with steel bars and interlacing strands of barbed wire. It looked like something had been chewing or clawing the bottom of the door frame. Nails had been hammered into the wood to try and discourage this from continuing. I assume that the structure is still used because there was a cord or two of firewood that had been put up under a nearby pole shed.

Construction of the next phase of the road from Logan Creek to Logan Pass started in 1925 and ended in 1928. This was considered the most challenging section of the entire Transmountain Highway because it had to be literally carved or benched into the side of cliffs of the Garden Wall. Even surveying the route was dangerous.1

Construction Camp 1 was established at Logan Creek. It was comprised of the headquarters, supply cabin, mess hall, and tents for 50 to 60 men. The now nonexistent Logan Pass Trail began there too. The path was used to establish and supply Camp 5 above what would become Triple Arches and Camp 6 at the future Oberlin Bend.1

Logan Creek is also where the road starts its climb at a 6% grade to Logan Pass 10 miles away. I hopped on my bike and started up toward the West Tunnel 2.7 miles away. Heavens Peak to the west was in splendid form. The combination of light snow and the bright sun caused the rock structure of this beauty to stand out.

Not far from the tunnel along the eastbound lane, I spotted the wavy, layered telltale signs of stromatolites in the rock face. Stromatolites are the structures made by photosynthetic blue-green algae. At one time in the Earth’s past, they were the most abundant and widespread form of life. These simple creatures are primarily responsible for transforming the Earth’s atmosphere from one nearly void of oxygen into one with over 20% oxygen.

I arrived at the West Tunnel, took my pack off and with camera in hand started exploring. Construction began in 1926 and ended in 1928. For a wage of 50 cents to $1.15 per hour, incredibly tough men labored in temperatures as low as -30 ℉ to hammer, chisel, and blast the tunnel that is 192 feet long, 30 feet wide, and 18 feet high.1 They also created two windows that are 16 feet wide and 20 feet high. These portals provide spectacular views of Heavens Peak and the upper McDonald Creek Valley.

After having lunch while lounging in the sun on the road parapet, I rode another one-half mile to The Loop. This is the only switchback on the entire Going-to-the-Sun Road. The competing design by George Goodwin had the road ascending the Logan Creek valley with the use of 15 switchbacks to reach Logan Pass. The more elegant design of Thomas Vint, even though more expensive, is the one that we enjoy today.1

I was down to a t-shirt and light pull over while at The Loop. But, after I started my descent back to the truck, I needed to keep adding layers. Even by mid-afternoon, the sun had not had much of an effect on the cold dense air that was lying in the bottom of the valley. According to the thermometer on the cabin, the temperature was 28℉ – not much warmer than when I started shortly after sunrise.

At Avalanche Creek, my vehicle was just one of many. No big deal. I have the memories of the morning and gratitude for the temporary solitude.

If you would like more information on the Going-to-the-Sun Road, my Multi-Touch interactive book of the same title describes hikes, camping, horse back riding, boat tours, kayaking, lodging, places to eat as well as relevant bits of history from West Glacier to Saint Mary. Included are zoom and pan maps and numerous photo galleries. Check it out on Apple Books.

Icons made by Freepik from www.flaticon.com is licensed by CC 3.0 BY