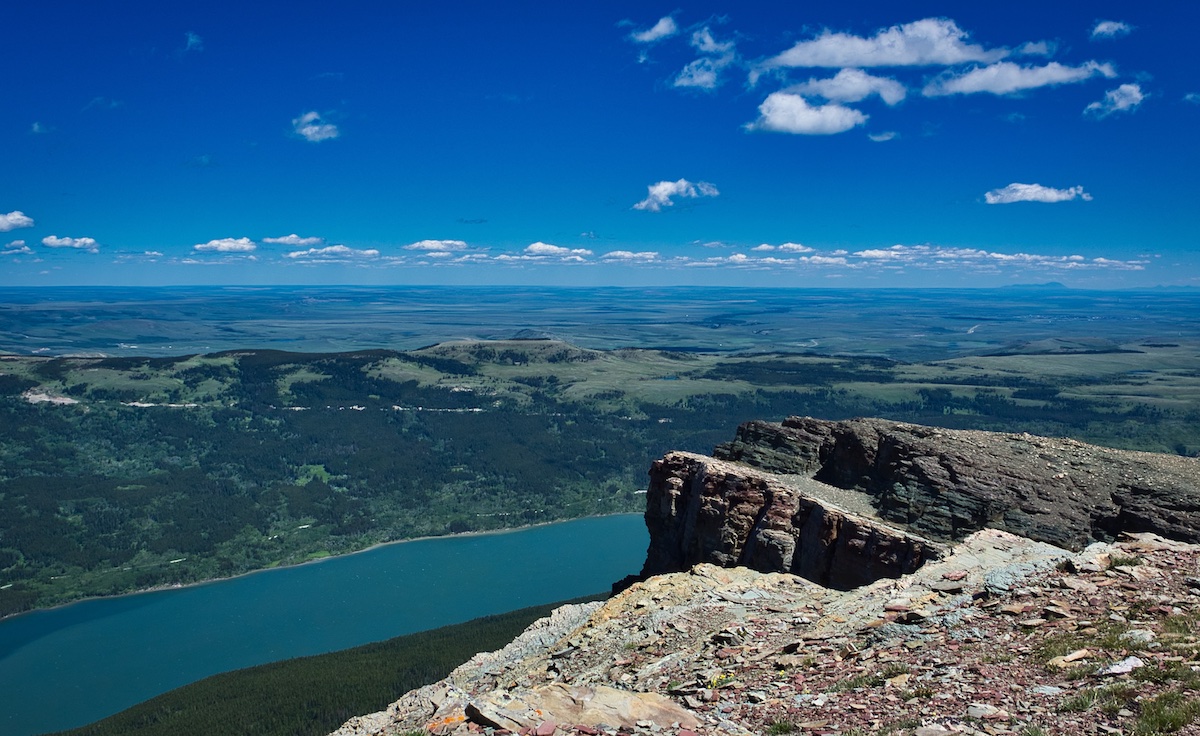 You’ll work for it, but the sweeping views from the 7,522-foot Scenic Point are spectacular. The good chance of seeing bighorn sheep is an added perk.

We can thank Louis Hill and the Great Northern Railway for this route. Designated as the Mount Henry Trail, it was constructed in 1913 as a thoroughfare for moving tourists from the railway station at Midvale (East Glacier) and the Glacier Park Hotel to the Two Medicine Valley.2 This path is also a tiny part of the 3,100 mile Continental Divide Trail that stretches from Canada to Mexico.

The trailhead for this hike, in the Two Medicine region on the east side of Glacier National Park, can be found 2.7 miles past the entrance station. There you will see a parking lot with the trail on the east side.

The exhilarating, and lung stretching ascent into Glacier’s alpine country starts at an elevation a little less than one-mile high and then climbs 2,350 feet over 3.9 miles. I have been on this hike when it is t-shirt weather at the trailhead, but at the top, the wind was brutal and cold. Do yourself a favor and be prepared with layers, a hat, gloves, and some sort of windbreaker jacket. Be sure to bring plenty of water and food. Finally, never venture out in Glacier National Park without carrying quickly accessible bear-spray.

At 0.6 miles, there is a short spur trail to Appistoki Falls. Directly above is Appistoki Peak. Both were named for the Blackfeet deity who looks over everything and everyone.5 I think the side trip is worth it even though the viewing point does not provide a full view of the falls.

The main footpath gradually leaves the stands of subalpine fir and lodgepole pine and enters the alpine environment. The views continue to get better and better as you ascend. To the northeast, on the far side of Two Medicine Lake, is the red 9,513-foot Rising Wolf Mountain. Rising Wolf is the Blackfeet name given to Hugh Monroe who was a Hudson’s Bay Company trapper and trader and probably the first white to explore the lands that would become Glacier National Park. About 1815 or 1816, in his late teens, he was sent to live with the Piikani (Piegan) tribe of the Blackfeet Nation under the care of Chief Lonewalker. His duty was to learn their language, discover whether or not the American Fur Company was operating in their territory, and try to ensure that the Blackfeet continued their trade with the Hudson’s Bay Company. He would later marry Chief Lone Walker’s daughter Sinopah.2,4,6

After a mile into the hike, you will start seeing the bleached white remains of whitebark pine trees. They most likely met their demise from the introduced fungal pathogen that causes white pine blister rust. The whitebark pines in the park have been hit pretty hard. Seeds of this tree are high in fat and protein and have historically been an important food source for black bears, grizzly bears, red squirrels, and Clark’s nutcracker. Efforts to identify trees resistant to the disease and propagate them have been underway for years.

The trail will eventually reach a saddle and then traverse the top of a bowl as it swings to the northeast and Scenic Point. This is where I have seen bighorn sheep. The path is narrow with a steep drop-off. Also, there can be a snow hazard there depending on the month. I was last there in late June, and most of the snow was gone. However, it is best to check the Glacier National Park Trail Status page before heading out. There is a short climb at the very end to reach Scenic Point.

Standing at Scenic Point and looking east one can appreciate why one of Montana’s nicknames is Big Sky Country. Try to locate the ‘Broken Mountains’ so named by Captain Meriwether Lewis. These are the Sweet Grass Hills and are about 100 miles away. From an imaginary line to the middle of those peaks, shift your gaze north about 5 degrees. Shorten the distance to roughly 25 miles. If you see signs of a creek meandering through the plains, you have located Cut Bank Creek and the general area where Lewis made his northernmost camp – Camp Disappointment, July 1806.1 The body of water more than 2,600 feet below you is Lower Two Medicine Lake.

Turn around toward the west, and you will see the family. Over the top of a ridge belonging to Appistoki Peak, you will see the beautiful and iconic Sinopah Mountain. Beyond Sinopah, Lone Walker Mountain is there looking over his daughter’s shoulder. Continuing clockwise is the massive Rising Wolf Mountain.

An old Swiss custom was to place bells on the tops of mountains and in passes for trekkers to ring as they arrived. Based on this custom, the Glacier Park Hotel Company, a subsidiary of the Great Northern Railway, petitioned the National Park Service to place locomotive bells in several locations within the park. Three sites were approved in 1926, and the fourth and last was approved for Scenic Point in 1929. In 1943, the bells were removed and donated to a World War II metal drive.5

If you are feeling the need for more adventure, you have the option of continuing on another 7 miles to East Glacier. Part of this 7 miles will pass through the Blackfeet Reservation for which you will need a Blackfeet Conservation and Recreation Permit.  Of course, vehicle logistics will need to be worked out. The east side fee-based shuttle service may be able to help.