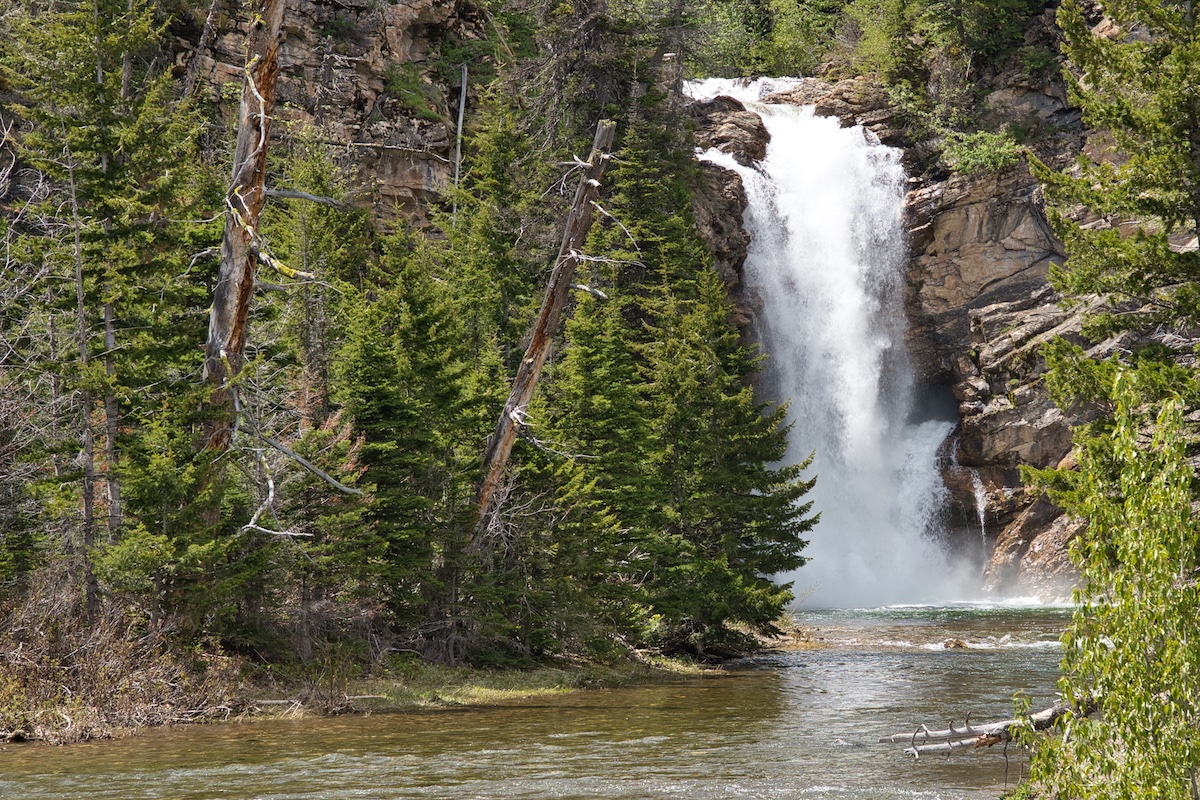 This is an easy stroll that opens up early in the season. There is a viewing platform reached by crossing a plank bridge over Dry Creek. Know that the park service may not install that bridge until mid-June. Don’t worry. The falls are still visible from the place where Dry Creek flows into Two Medicine Creek.

Drive 1.1 miles past the Two Medicine Entrance Station. There’s an obvious parking lot on the right.

The main Running Eagle Falls Trail begins near the middle of the parking area and continues for 0.2-mile to the falls. The Nature Trail starts at the south end of the parking lot. This route joins the main track before arriving at the falls. Both footpaths are accessible, wide and usually in great shape.

Thimbleberry, cow parsnips, and baneberry grow in the moist areas along the path. All have white blossoms and bloom from June to July. In spring, on calm, misty days, the sweet scent of black cottonwood buds seems to be especially strong.

Interpretive signs along the Nature Trail introduce the hiker to plants that were important to the Blackfeet people. You’ll learn their name for each plant, identification tips, and how they used it for food, medicine, or fuel.

In no time at all, the route emerges onto gravel and the high watermark of Dry Fork. Follow the path to the footbridge over this creek and continue toward the wooden viewing platform. In exposed areas, look for the blue nodding blossoms of harebells during July and August.

If one visits this place during spring run-off, it appears as though there’s only one waterfall. As the water level subsides, the hidden torrent of water rushing out of the lower half of the cliff face becomes visible.

A sink hole in Two Medicine Creek upstream from the cascades contributes to this phenomenon. When the water level is high, the underground channel cannot carry the entire water volume. The excess continues downstream and plummets over the precipice. During lower volume stream flows, all the water travels underground to exit at the rock face.

Were it not for the incredibly resistant limestone of the Altyn Formation, there may never have been waterfalls here. The valley filling glaciers from the Pleistocene’s Great Ice Age pulverized softer rock. A testament to the durability of this stone is Chief Mountain, which is also Altyn limestone.1 Everything between it and the Rocky Mountain Front eroded.

Something else here is odd. Usually, with sedimentary rock, the age of layers decreases, going from bottom to top. In other words, the top of Rising Wolf Mountain is younger than its base. Streams flowing into the ancient Belt Sea deposited sediments making up the uppermost rock long after that of lower layers.

The Altyn rock over which the water plunges is around 1.5 billion years old.4 The predominant fossils found in this formation are stromatolites created by single-celled cyanobacteria living in shallow water environments. Stromatolites made by these oxygen-producing cells are the earliest evidence of life on Earth and date back even farther to 3.5 billion years.

Contrast that age with that of the rock under the viewing platform. This geologic formation lying below the Altyn is from the late Cretaceous Period and only about 80 million years old.2 During this time, the shallow Western Interior Sea stretched from the arctic over most of Montana to the Gulf of Mexico. Inhabitants included more advanced forms of life, such as sharks, giant bony fish, and plesiosaurs.

Starting about 150 million years ago, tectonic forces from the west working on the North American continent caused mountains to rise inland. These forces continued for 90 million years. Before the great push ended, the compression became significant enough to shove a piece of the continent several miles deep by a few hundred miles wide, 50 miles eastward over the top of the younger Cretaceous rock.4 It’s called the Lewis Overthrust, and the viewing platform sits at its base.2

Running Eagle Falls gets its name from a remarkable adolescent female Blackfeet warrior. Her name was Otaki until Chief Lone Walker gave her the male name Pi’tamaka or Running Eagle, as a sign of respect and honor for her bravery in battle.

Pi’tamaka yearned to know her purpose in life. She went to the cave of rushing water for a vision quest. There the adolescent warrior prayed and fasted for most of a week, hoping her spirit helper would give direction. The upshot was that she decided never to marry but to live in service of her people.5 In the late 1870s, Running Eagle died in battle with the Flathead tribe.3

If you’re planning a drive over the Going-to-the-Sun Road, I invite you to check out my book – Glacier National Park, Going-to-the-Sun Road: A Traveler’s Guide at Apple Books. Inside, find lots of things to do and places to see while traveling between West Glacier and Saint Mary.