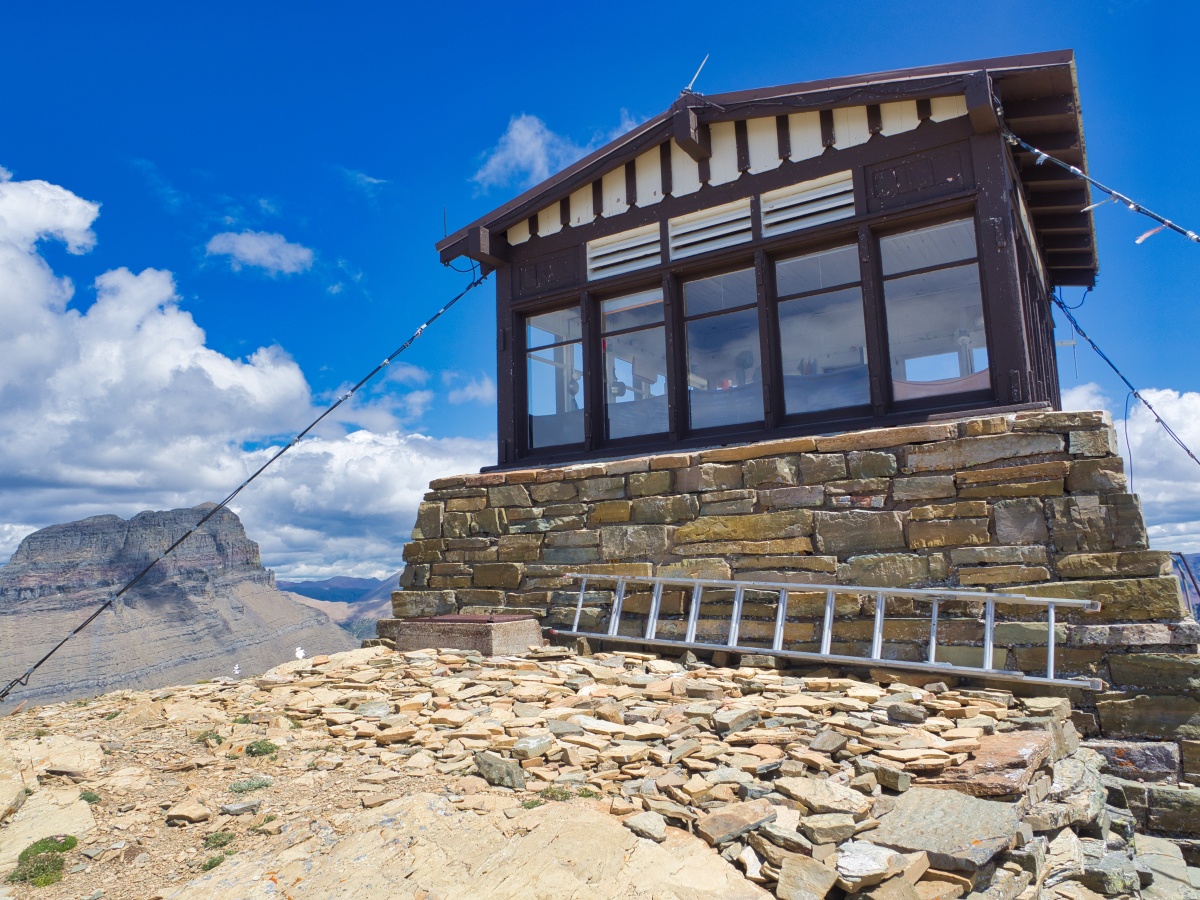 This spectacular hike, on the Garden Wall via the Highline Trail is one of several routes to the Swiftcurrent Fire Lookout. The trailhead is located at Logan Pass on the north side of the Going-to-the-Sun Road across from the Logan Pass Visitor Center.

The scenic drive up to Logan Pass and the trailhead is 32 miles from the west entrance and 18 miles from the east entrance. Consider that just a warm-up to what you will experience on this trek.

Rather than park in the visitor center parking lot, we chose to drive only as far as The Loop and leave the car there. We then caught the first-morning shuttle to Logan Pass. That way we didn’t need to worry about parking or trying to find a ride at the end of the day. Of course, you could leave your vehicle at the Apgar Visitor Center on the west side or the St. Mary visitor center on the east side and let the free shuttles deliver you and pick you up.

This gap between the mountains, at an elevation of 6,646 feet, was named for Major Wm. R. Logan who was the first superintendent of Glacier National Park from 1910-1912. However, Logan Pass was used long before white people arrived. The Kootenai Indians utilized it during winters to avoid trouble with the Blackfeet on the east side. Their name for the pass meant “Pull the Packs Up”. The cliffs at the head of Logan Creek were scaled by pulling men, women, children, and their packs up one ledge at a time.8

Almost immediately after Glacier National Park was created in 1910, the business of building roads began. After more than 20 years of work, on July 15, 1933, the engineering marvel of the Going-to-the-Sun Road was dedicated at Logan Pass with a grand opening ceremony that was attended by more than 4,000 people.2 Little did anyone suspect that in the future hundreds of thousands if not millions would visit Logan Pass in a season.

If you have been to the Lake McDonald Lodge or the Many Glacier Hotel or any of several other early park buildings, you may have noticed that the visitor center at Logan Pass seems to be different. It is. It was designed and built during a time in our country when our culture was recovering from World War II and to some degree even the Great Depression. Our country was focused on progress and a more efficient lifestyle. This, in turn, affected building practices and architecture.1

The National Park Service conceived of a ten-year building program in the 1950s and dubbed it Mission 66. The goal was to lift the national parks out of the state of disrepair, resulting from years of neglect, by 1966. In fitting with the culture of the time, the design philosophy was “simple contemporary buildings that perform their assigned function and respect the environment”. The architectural style of not only the Logan Pass Visitor Center but also the St. Mary Visitor Center is known as Mission 66 or Park Service Modern.1,2

The trail begins by meandering through stunted subalpine fir for about one-quarter of a mile. It then becomes a ledge on the side of a rock face with a one-hundred-foot drop. The Park Service has installed a covered cable for people to hang on to if the exposure is a little too exhilarating. This only lasts for about one-quarter mile.

As you move along the route, the panorama of the Livingston Range to the west is impressive. If the findings of recent research on the health benefits of experiencing awe pan out, this is a perfect place to get healthy. The immensity and variety of the glacial features can leave one transfixed.

To the southwest is Mount Oberlin and Mount Cannon. In between these two beauties is a hanging valley which was created by a smaller glacier that flowed into a much larger valley filling glacier. The thundering cascade plunging out of that valley is Bird Woman Falls. Signs along the Going-to-the-Sun Road indicate the height of the falls is 492 feet. However, the World Waterfall Database disagrees with this height. It states that the drop is 960 feet.

I cannot think of a time on the Highline Trail when we didn’t see mountain goats or bighorn sheep. They are beautiful animals but give them plenty of room. Remember they are wild and could do significant damage to a human in a split second. The hoary marmot is another herbivore that you are likely to come across is. This rodent is considered the largest North American ground squirrel. It tips the scales at a hefty 8 to 15 pounds for adults. They can be beggars. Please do not feed them.

It’s not uncommon for grizzly bears to use this area too. In the summer of 2014, a grizzly and a man encountered each other on a trail section that had nothing but rock wall above and below. A picture taken by a local fellow through a telephoto lens shows the man after he had scrambled about ten feet down a cliff to a small rock outcrop while the grizzly walked above him. You just never know in the park. Always carry bear spray where it is easily and immediately available and know how to use it.

Eventually, you will come to some switchbacks that lead up to the saddle between Haystack Butte and a flank of the 9,553-foot Mount Gould. At about 7,024 feet, it’s not uncommon for there to be snowfields in July. Nevertheless, this makes for an excellent place to rest, hydrate, have a snack, and take in the grandeur.

The path continues to climb for a short distance before it descends to Granite Park. To the southwest is the magnificent u-shaped McDonald Creek Valley. The u-shape is the result of textbook glacial sculpting. Imagine the entire valley ice filled with only the peaks of the mountains showing. Such was the case 20,000 to 11,000 years ago.7 Those valley filling glaciers gave us the chiseled horns, like Reynolds Mountain seen at Logan Pass, and the knife edge ridges or aretes like the Garden Wall. Glacier National Park gets its name from the landscape left by these massive ice rivers.

The 26 glaciers remaining in Glacier National Park are not from that time. These ice masses are about 7,000 years old and peaked in the middle 1800s. Sadly, due to warming trends, it is predicted that these 26 will be gone around 2030.6

At 6.9 miles from the trailhead, there is a junction for a 0.9-mile spur trail that ascends 900 feet to the Grinnell Glacier Overlook and the top of the continental divide. A person should be in pretty good shape to take on this route. The climb is rewarded with spectacular views of Mount Grinnell, Upper Grinnell Lake, Grinnell Glacier, Angel Wing, and Mount Gould.

The junction for the Granite Park Trail and the chalet is at 7.6 miles from the trailhead. Stay to the right on the Highline Trail and continue 0.3 miles to the Highline and Swiftcurrent Pass Trail junction. By the way, there is no water at the lookout nor is there any on the way up. So, if you find your supply low, drop down to the  Granite Park Chalet and buy some bottled water before starting the climb up Swiftcurrent Mountain.

Swiftcurrent Pass is 0.7 miles from the last junction. The route up to the lookout starts just before the pass.

The treeless climb is a strenuous 1.2 miles with 1200 feet of elevation gain. At the top, straddling the continental divide at 8,436 feet is the highest fire lookout in the park. The 14×14 building was constructed in 1936 for $7,500. It is now listed on the National Register of Historic Places.5 Attached to each corner of the building are cables that are anchored in the ground. Incredibly strong winds can blow up there.

Looking to the northeast is Mount Wilbur. Windmaker Lake is more than 3,000 feet straight down. To the west, you can look down on Flattop Mountain and see part of the 18,702 acre Trapper Creek Fire that burned in 2003 during the ‘Summer of Fire’. Heavens Peak rising up in the west is unmistakable.

Not far from the northwest corner of the lookout is a mound of moss campion. It’s hard to miss the beautiful pink flowers that it produces from June to August. The unique thing about this plant is that it is very long-lived. Who would expect that a tundra plant would have such longevity in an incredibly harsh environment?

A woman leading a group from the Granite Park Chalet told us that the particular plant by the lookout was probably over 150 years old. I did a little checking and found a study where the researchers came up with a way to estimate the age by measuring the moss campion diameter. The 150 years seems consistent with their findings.4 We were also told that even though the plant is hardy, the one thing that the plant cannot withstand is being walked on.

The Rest is All Downhill to The Loop (6.5 miles)

This leg of the trip will drop around 3,900 feet as you travel from the lookout to The Loop. Since the downhill trek will go by the Granite Park Chalet, a look inside is worthwhile if you have never been there.

The single-story building in back of the main chalet was built by the Great Northern Railroad in 1913. The following year the two-story main structure was constructed. Both are made of rock quarried on location. These two buildings have been placed on the National Register of Historic Places.5 They are a working museum.

The ground floor of the main building is made of stone that contains ancient ripple marks and mud cracks preserved in the shallow water areas of the ancient Belt Sea that existed from 1.6 billion years ago to 800 million years ago. The sea would have been located where eastern Washington, northern Idaho, and western Montana are today.7 Amazingly, during that time nothing lived on land. Fossil evidence puts the oldest land organism at about 440 million years.3

If the old timbers of the chalet could talk, I’m sure there would be some colorful stories. Think about the wealthy visitors lured west away from the Alps by Louis Hill and the Great Northern Railroad. I’ll bet the Brewster boys could tell a tale or two about the Northern Circle pack trips with these ‘city folks’.

Tales from the summer of 1967 surely would be in the timbers. Dry weather and lightning that summer resulted in several fires burning inside the park including the 2,200-acre Glacier Wall Fire which would have been easily seen from the chalet.

That same summer shortly after midnight on August 13 guests in the chalet were awakened by screams coming from the backcountry campground. A group of people was organized to investigate and upon arriving at the campsite found a terrifying scene. I will not describe the gruesome details here. Suffice it to say Roy Ducat was severely mauled, and Julie Helgeson was killed – both by the same grizzly bear. Emergency first aid was administered inside the chalet.

Luring bears in with garbage for the entertainment of guests had been going on for decades. This incident helped put an end to that practice.

Hiking to The Loop from the chalet was done mostly in heavy timber before the summer of 2003. The standing dead trees that you see from the trail were most likely fatalities resulting from the Trapper Creek Fire. That summer 136,000 acres or 13.4% of Glacier National Park burned. The remarkable rebirth of the next forest is underway and we get to watch.

After approximately 18 miles and plenty of elevation, a nice meal and cool beverage with friends would top off a great day.

One thought on “Swiftcurrent Lookout”